The Prince paddles were just released in 2018 and have quickly become a favorite option, especially on the professional circuit. Read the in-depth review.

The Prince paddles were just released in 2018 and have quickly become a favorite option, especially on the professional circuit.

Here is an in-depth look at the Pros and Cons of using Prince paddles for pickleball.

Quick Overview of Why These Paddles Are Different

What makes a Prince paddle unique? These paddles combine some of the best features of a tennis racquet with the thicker core found in some of the top pickleball paddles.

You get a paddle that is closer in shape and size to a tennis racquet, which also gives you a larger sweet spot. Instead of hitting from the dead center, you have more leeway for striking the ball and still maintaining control and power.

These paddles also include a thick polymer core that gives you ultimate control over the amount of power that you deliver with each swing. It is more responsive, which allows you to hit dink shots or power slam the ball.

If you play tennis, you have likely purchased Prince products before. They make quality tennis racquets, balls, and other equipment.

Their entry into the pickleball paddle market is relatively recent. They also chose not to produce their own paddles.

The paddles labeled as “Prince” paddles are manufactured by Paddletek. The small company is based out of Michigan and is one of the most recommended paddle manufacturers.

Instead of manufacturing their own paddles, Prince decided to partner with the experienced pickleball company to release a new line of Prince-branded paddles.

There are currently two Prince paddles – the Spectrum Pro and the Response Pro. The first feature that you notice when examining these paddles is their shape.

Both paddles are shaped more like a tennis racquet, due to the rounded face and longer handle. With the Response Pro, you get a 5.5-inch long grip. The Spectrum Pro features a 5-inch grip.

By using that same round shape in their paddle designs, Prince was able to release a pickleball paddle with a larger sweet spot. In fact, some pickleball players claim that these paddles have the biggest sweet spot you can find.

What is the sweet spot? It is the area of the paddle that provides the least amount of vibration during impact with the ball. Hitting the ball on this area helps increase control and power. It also reduces strain on the wrist, which may reduce the risk of pickleball-related injuries.

Prince used a shape that they are familiar with when designing their paddles. However, they did not have experience with the other components of the paddle.

The insides of these paddles feature 9/16-inch thick polymer cores that are thicker compared to most paddle cores, which offers several Pros to players.

With the thicker core, you get a greater response when the ball hits the paddle. If you swing big, the thicker polymer core absorbs more of the power and then sends it back, helping you deliver powerful swings.

In fact, you may even get more power than you want. Some people find that these paddles are too much for their play style. However, you can also limit the power with a soft swing.

When you swing lightly, the thick core produces less bounce, which allows you to send soft lobs to the other side.

For an experienced player, the core found in these paddles should offer the ultimate level of control. For those who are just getting into pickleball, this responsiveness may be too intense.

Pros and Cons of Playing with the Prince Paddles

As mentioned, these paddles provide several benefits for most players, especially for those with a tennis background. The top Pros include:

The large sweet spot and responsive polymer core are the highlights of these paddles. As discussed, these paddles allow you to send the ball flying with extra power. You can also hold back and deliver a soft hit.

Besides the benefits already discussed, these paddles are well-balanced. The head is not too heavy, thanks to the longer grips. For most players, this balance is necessary for spin, power, and control.

You also get to choose between two separate weight options and two grip sizes. Both the Response Pro and the Spectrum Pro are available in light or standard weights.

The light versions weigh between 7.1-ounces and 7.6-ounces, depending on whether you choose the thinner or thicker grip. The standard weight paddles weight between 7.7-ounces and 8.1-ounces.

While half an ounce may not seem like a major difference, the weight can start to impact your game when you play competitively. With the lighter weight versions, you sacrifice a little power in favor of control, while the heavier options provide the opposite.

There are three potential issues to consider before buying your first paddle from Prince. The first issue is power. These paddles can deliver the most power on big swings, which may offer too much power for new players.

When you are first learning to play pickleball, it is better to focus on your control and accuracy. While you get a more responsive feel with the thick polymer core, it takes experience and practice to master the flexibility of these versatile paddles.

Besides beginners, people with no tennis background may find that these paddles feature a learning curve.

The Prince-branded paddles are also slightly more expensive compared to some of your other options. However, you need to remember what you get for the extra price.

You get the thickest core and largest sweet spot, along with a paddle that may last for many years. The fact these paddles hold up well increases their overall value.

These Paddles Are Pro-Approved and Recommended

While these paddles are still relatively new, several professional pickleball players have already adopted them as their new favorite paddles.

Simone Jardim is a great example of a pro who has experienced the benefits of using these paddles. She is one of many tennis pros to join professional pickleball after retiring from tennis. She is also the official spokesperson for this brand of paddles.

In recent years, Simone Jardim exclusively used the ProLite paddles. As a tennis player, she is likely familiar with Prince products. When they released their pickleball paddles, she switched allegiances.

After switching, Simone Jardim went on to win three golds during pro events in 2018. She claims that the big sweet spot and thicker core were big reasons for her wins. She also pointed out the similarities between these paddles and the typical tennis racquet.

If a professional like Simone Jardim recommends these paddles, you can trust that you are getting a great product. 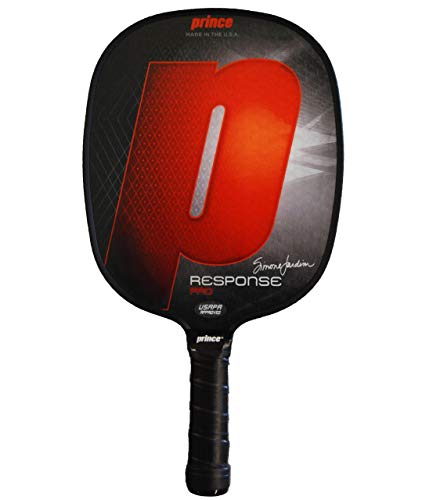 Response Pro is one of the two paddles released by Prince. It features the rounded-shape, thick polymer core, and several other details that are worth exploring:

The Paddletek polymer core is one of the best features of this paddle. One feature that does not get discussed frequently is the composite face. Instead of graphite, Prince decided to use composite fiberglass material, which offers more texture compared to graphite.

The textured surface helps grab the ball, which adds to spin and accuracy. With these benefits, you can get great passing shots and play offensively.

The long grip and head also provide an easier transition for tennis players. If you regularly play tennis and are new to pickleball, you may enjoy the familiar feel of these paddles.

The long handle is also great for those who play with a two-handed grip. You need the extra length to give both hands room to grip the paddle.

The Response Pro and Spectrum Pro are also available in several different colors. You can choose from orange, purple, red, or blue.

If you want to play with the same paddled used by Simone Jardim, you need to select the blue or red variety. These options are available in the heavier weight used by Jardim. 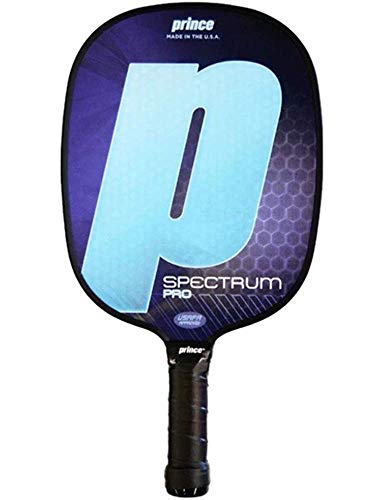 Spectrum Pro is the second paddle that benefits from the experience of Paddletek pickleball design. It also includes the thick polymer core used in the Response Pro. Here are the main features and specs:

The Response Pro and Spectrum Pro are almost identical. They use the same materials and feature the thicker honeycomb core. Like the Response Pro, you can also choose between two different grip thicknesses.

The main difference is the length of the grip. Instead of 5.5-inches, the Spectrum Pro has a 5-inch grip. If you prefer to play with a one-hand grip, you may prefer this slightly shorter version.

What Are the Best Alternatives to Prince Paddles?

Prince pickleball paddles are quickly becoming the preferred choice of players who compete in professional tournaments. However, there are still several other great options for players of all skill levels.

Some of the best alternatives include:

The Selkirk line of AMPED paddles is widely-considered to include some of the best paddles available. They are in the same price range as the Response Pro and Spectrum Pro. However, they tend to have shorter handles and mostly come in standard paddle shapes.

The closest direct competition to the Prince paddles is the Selkirk Epic. It has a 5.25-inch handle and a decent sweet spot. It is also shorter, due to the extra width. It features the X5 polymer core, which is slightly thinner compared to the Prince products.

Selkirk Maxima is another option that offers some of the same features. It also has a 5.25-inch handle, but it has a longer reach. While it resembles a tennis racquet, it is narrow, which limits the size of the sweet spot.

The Latitude is another option from Selkirk. It is one of their recreational paddles and available at half the price of the other options. It includes a composite face and polymer core with a vinyl surface. The dimensions are also comparable to the Prince paddles, but they have a less-rounded shape.

The Phoenix Pro pickleball paddles from Paddletek are also suitable alternatives. They are made by the same company that manufacturers the Prince paddles.

The polymer core used in these paddles is not as thick compared to the Response Pro or Spectrum Pro. They also have shorter handles, measuring 4.25-inches. Their main strength is their balance. They have great weight distribution and are designed for delivering more power.

Conclusion – Who Should Start Playing with Prince Paddles?

The two paddles from Prince are both great options for all types of players. While beginners may need to work a little harder to master the versatility of these well-balanced paddles, they are also the closest to a tennis racquet.

These paddles are also well-suited for more experienced players. Thanks to the thicker polymer core and racquet-like design, you get the biggest sweet spot and the most responsiveness.

The Prince paddles are built to last, versatile, and powerful. They also offer reliable spin and accuracy, which is wonderful for players of all skill levels.

If you want to get a new paddle, Prince currently makes two of the best options. Consider getting the Response Pro if you play with a two-handed grip or the Spectrum Pro if you play single-handed.